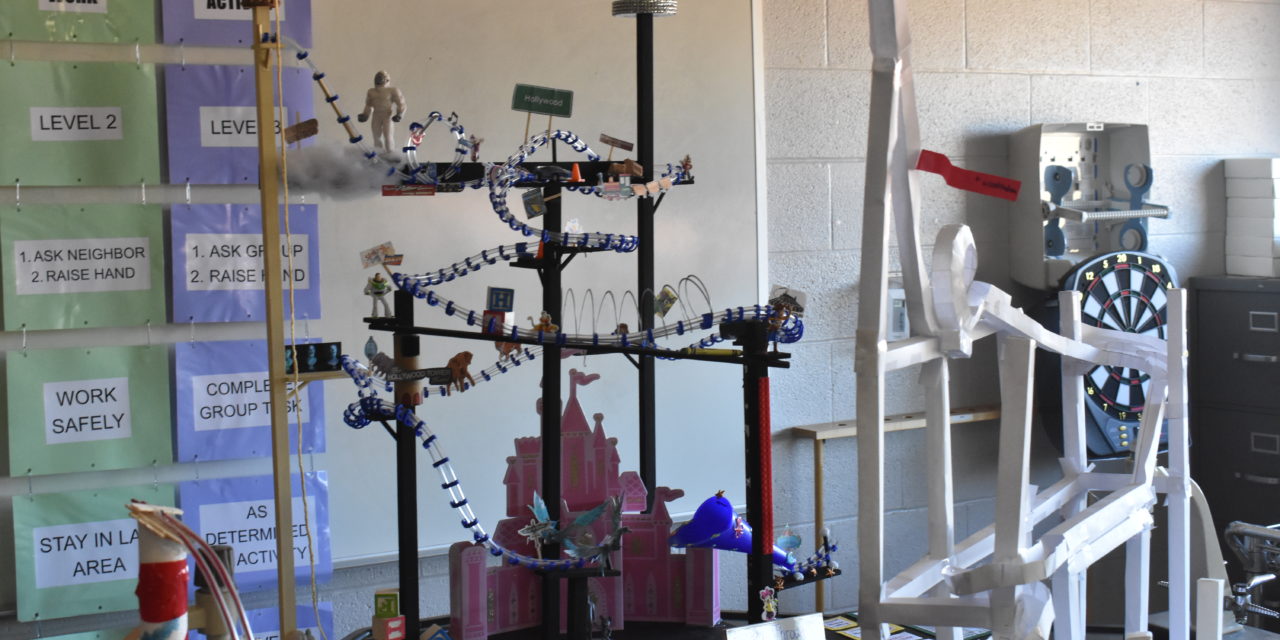 The AP physics classes, under instruction of Jonathan Graschel, recently made model rollercoasters out of toys and household items.

Graschel tasked his AP Physics classes with designing and building miniature rollercoaster models out of various items. Graschel based the project on several factors.

“The idea is that the students use either household or store-bought items,” Graschel said. “They’ve used items such as poly tubing, cardboard, pipe insulation, paper, and other materials.”

The coaster is meant to be an all in one project of everything the students learned about momentum and impulse.

“I wanted to do two final projects that went over everything rather than multiple projects throughout the year,” Graschel said. “Having that many projects in a year is a lot harder.”

The project was inspired by his past work as a teacher at Santa Fe.

“While I was teaching there, I tried to figure out how to tie the students’ mathematical and physical skills into a single assignment,” Graschel said. “I researched several ideas and found a rollercoaster project online and thought it would be a fun to have the kids make rollercoasters and ride a toy car down them.”

The coasters have many unique designs that make great use out of paper and toys. A car with a marble acting as the rider is greeted with figures of characters and scenery acting as visual attractions to the ride.

The rollercoasters are being graded on a few factors, the first being a presentation grade.

“While some present their projects live,” Graschel said. “Others filmed themselves showing off the rides.”

There’s also the thrill factor of the ride.

“If students meet all the requirements they pass, but they don’t get a 100.” Graschel said. “After all no one wants to ride a boring rollercoaster. They need to add a thrill factor to make their ride stand out.”

Many students have found unique ways to do this. Perside Yolou worked with Link Holloway to make create the camo style “Jungle Ride.”

“We worked with a limited amount of space,” Yolou said. “This is why we placed it on the ground.”

Yolou and Holloway designed the coaster to have a camo jungle style. This design came into fruition because their coaster was and displayed on the classroom floor, which fit with the design.

“That was the most we could do with that amount of space,” Yolou said. “Realistically this allowed us to make the loops and drops more intricate. We also had to calculate the speed, kinetic energy, and length of the track to make sure the car moved the whole time.”

She did a walkthrough of the ride. The ride looks like a water slide set in the deep jungle, surrounded by dirt made of kinetic sand and plastic patches of grass. The marble heads straight down into a massive loop and gliding straight into the final curve before coming to a stop.

Another coaster created was “Ring of Fire” by William Hampton and Griffon Camp.

“We had to have a major thrill factor,” Hampton said.  “We put a flaming ring at the end for riders to look forward to.”

“The Ring of Fire” was the longest rollercoaster in the class, measuring in at 9.9 meters long. The ride kept expanding as the project continued.

“When we started it was about the height of a door,” Hampton said. “Eventually it was as long as the living room.”

The ride also has a black track further adding to the experience.

“We used black insulation to make the ride look charred.” Hampton said. “This leads up to ring itself.”

This makes the track look like a trail to the fire, inching closer by as the ride continues.

“It would fall into a wide slant that lead to a big hoop,” Hampton said. “This would then transition into two hills, a 180 degree turn, and two bunny hops before heading into the ring.”

Another coaster created was “The Batmobile” by Nathan Watts and Dylan Haught.

“We had to follow the project’s criteria of hills and turns,” Watts said. “We added in the thrill factor of a jump at the end of the track.”

The ride is similar to a toy raceway for the rider to go through designed like a path for “Batman’s” ride.

“We started from a tall height,” Watts said. “Gravity did its job an allowed the marble to go all the way down before the jump.”

The force of the jump lets the car soar through the air like the real “Batmobile.”

“We had enough potential energy to work into kinetic energy.” Watts said. “It was everything we needed to pass and make the ride stand out.”

The projects reside in Graschel’ s classroom, but he said the students can do what they want with the rides once they’re graded. 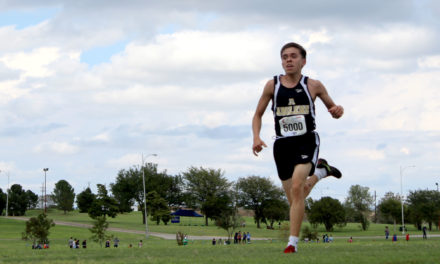 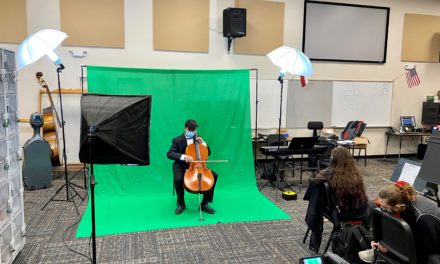 Playing to the Camera

The Gallimaufry: Years of Greatness